The Laws of Nature

Our next step in our study is a consideration of the "Laws of Nature". The whole universe is included within the ideas of succession and causation, but when we come to what we call the laws of nature, we are unable to say over what area

they extend. Scientists find themselves compelled to speak with greater and greater caution as they travel beyond the limit of actual observation. Causes and effects which are continuous within the area of our observation may not exist in other regions, or workings which are here observed as invariable may be

interrupted by the irruption of some cause outside the "known" of our time, though probably not outside the knowable. Between 1850 and 1890 there were many positive statements as to the conservation of energy and the indestructibility of matter. It was said that there existed in the universe a certain amount of

energy, incapable of diminution or of increase; that all forces were forms of that energy, that the amount of any given force, as heat, might vary, but not the total amount of energy. As 20 may be made up of 20 units, or of 10 twos, or of 5 fours, or of 12+8, ) and so on, but the total remains as 20, so with the varying forms and the total amount. With regard to matter, again, similar

On these two ideas science was built up, and they formed the basis of materialism. But now it is realised that chemical elements are dissoluble, and that the atom itself may be a swirl in the ether, or perhaps a mere hole where ether is not. There may be atoms through which force pours in, others through

which it pours out – whence? – whither ? May not physical matter become intangible, resolve itself into ether? May not ether give birth to new matter?

All is doubtful where once certainty reigned. Yet has a universe its "Ring-Pass-Not". Within a given area only can we speak with certainty of a "law of nature".

What is a law of nature? Mr. J.N. Farquhar, in the Contemporary Review for July, 1910, in an article on Hinduism, declares that if Hindus want to carry out reforms, they must abandon the idea of karma. As well might he say that if a man

wants to fly he must abandon the idea of an atmosphere. To understand the law of karma is not to renounce activity, but to know the conditions under which activity is best carried on. Mr. Farquhar, who has evidently studied modern Hinduism

carefully, has not grasped the idea of karma as taught in ancient

scripture and in modern science.

A law of nature is not a command, but a statement of conditions. This cannot be repeated too often, nor insisted on too strongly. Nature does not order this thing or the other; she says: "Here are certain conditions; where these exist, such and such a result will invariably follow." A law of nature is an invariable

sequence. If you do not like the result, change the preceding conditions.

Ignorant, you are helpless, at the mercy of nature’s hurtling forces; wise, you are master, and her forces serve you obediently. Every law of nature is an enabling, not a compelling, force, but knowledge is necessary for utilising her powers.

Water boils at 100 degrees C. under normal pressure. This is the condition. You go up a mountain; pressure diminishes; water boils at 95 degrees. Now water at 95 degrees will not make good tea. Does Nature then forbid you to have good tea on a mountain-top? Not at all: under normal pressure water boils at the necessary temperature for tea-making; you have lost pressure; supply the deficit; imprison your escaping steam till it adds the necessary pressure, and you can make your tea with water at 100 degrees. If you want to produce water by the union of hydrogen and oxygen, you require a certain temperature, and can obtain it from the electric spark. If you insist on keeping the temperature at zero, or in substituting nitrogen for hydrogen, you cannot have water. Nature lays down the conditions which result in the production of water, and you cannot change them; she neither supplies nor withholds water; you are free to have it

or to go without it; if you want it, you must bring together the necessary things and thus make the conditions. Without these, no water. With these, inevitably water. Are you bound or free? Free as to making the conditions; bound as to the result, when once you have made them. Knowing this, the scientific man, face to face with a difficulty, does not sit down helplessly; he finds out

the conditions under which he can bring about a result, learns how to make the conditions, sure that he can rely on the result. 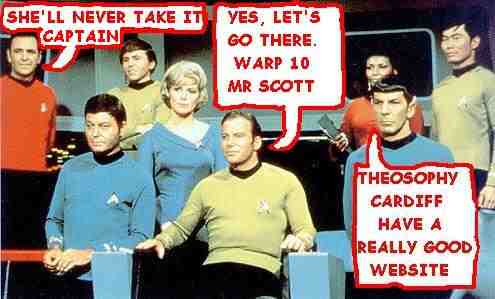 All Wales Guide to Theosophy